The U.S. trucking industry still faces uphill battles in getting fleets to where the sizes they once were,  and to get more younger drivers involved in the business.

In 2012, truckload activity was barely up 1 percent, according to the American Trucking Association. But tonnage was up, according to latest ATA surveys. And overall, that’s good news, sasys ATA Chief Economist Bob Costello. 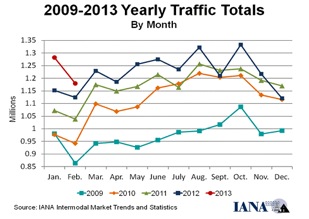 “The trucking industry started 2013 with a bang, reflected in the best January tonnage report in five years,” ATA Chief Economist Bob Costello said in a press release. “While I believe that the overall economy will be sluggish in the first quarter, trucking likely benefited in January from an inventory destocking that transpired late last year, thus boosting volumes more than normal early this year as businesses replenish those lean inventories.”

Some trucking categories experienced declines in fourth quarter 2012. This graph below shows the yearly traffic totals continues to decline, even as 2013 moves through its first half.

According to the IANA, the industry needs nearly 100,000 new drivers per year for the next 10 years to replace lost drivers in the recession, and those who are getting out of the business. That’s an incredible amount of drivers to sustain in the economy. Also, the average truck driver is 10 years older than the average American, and many young people are not exactly flocking to trucking jobs.

And highway congestion is a problem for many drivers and trucking companies as well. Recent statistics show that the trucking industry suffered $25 billion in lost productivity from trucks being in congested areas. And when cargo is tied up in highway congestion, then that’s valuable money lost.

At last year’s American Trucking Association’s conference, ATA President Bill Graves said that intermodal transportation industry can be stimulated by job growth and more jobs. We are waiting on our U.S. government to put some of those steps in place. At Calhoun Truck Lines, we are hopeful that the economy will continue to grow, container volumes will rise and we will be able to move more freight from our five Midwest trucking facilities.

Each of Calhoun Truck Lines’ operational facilities is fully equipped to handle your intermodal trucking needs. The company is dedicated to delivering a level of service that consistently meets our customers’ expectations. Our responsibility continues with providing a professional working environment for our employees and maintaining a safety conscious truck fleet to share the roads with fellow motorists.