Has there been another setback to Calhoun Truck Lines and the rest of the still economically challenged U.S. trucking industry? Only time will tell. Interstate shipping firms learned recently that their request for an extra three months’ time before a new trucking hours-of-service rules take effect was rejected by the Federal Motor Carrier Safety Administration.

Apparently, the FMCSA does not believe ATA has demonstrated good reason to delay compliance, and that the FMCSA is not willing “to sacrifice what may be several months of public safety benefits from the timely implementation of the rule.” 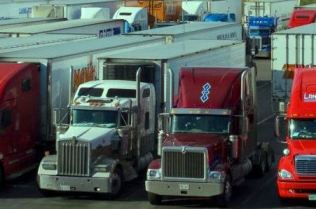 The American Trucking Association had asked the FMCSA a month ago to delay the start of updated hours-of-service regulations. But like the US Senate and House Republicans, it seems like trucking’s main bodies have a hard time agreeing as well.

Trucking Info wrote: “In response to a late January letter from ATA president Bill Graves, FMCSA Chief Counsel T.F. Scott Darling III on Feb. 22 denied a request to delay compliance with the new rules from a scheduled July 1 start date until three months after a federal court issues its decision on challenges to hours of service that ATA and other groups have filed.“

The Hours of Service of Drivers Final Rule was published in the Federal Register on December 27, 2011. The Final Rule’s effective date is February 27, 2012, and the compliance date of selected provisions is July 1, 2013. More info is at the FMCSA Hours-of-Service page.

The final rule, according to the FMCSA, required truck drivers who maximized their weekly work hours to take at least two nights’ rest when their 24-hour body clock demands sleep the most – from 1:00 a.m. to 5:00 a.m. This rest requirement is part of the rule’s “34-hour restart” provision that allows drivers to restart the clock on their work week by taking at least 34 consecutive hours off-duty. The final rule allows drivers to use the restart provision only once during a seven-day period.

“I’m not sure how this ruling will affect capacity over the next twelve months,” said Brent Bois, President of Calhoun Truck Lines, a leading Midwestern intermodal trucking company. “It seems as if our government may take care of that problem with the unresolved “sequester” deadline just days away. However, our elected official’s inability to resolve these issues will have a negative impact on our economy for the remainder of 2013 and will mitigate any truck capacity issues this year.”

“The real issue resides with training drivers and enforcement agencies,” continued Bois. “The likelihood of inconsistent enforcement and unwarranted violations will increase and have a negative affect on the trucking community. This will not help add drivers to the industry and could have a much larger impact on capacity in the long run.”

Calhoun Truck Lines Honors its 2012 Driver of the Year