In the first six months of this year, Calhoun Truck Lines has seen encouraging signs that our economy is getting back on its feet, if the increase in intermodal traffic is any indication. The Association of American Railroads recently announced that June was a good month for intermodal rail traffic across the United States. The association’s senior VP was quoted:

“U.S. intermodal originations in 2012 through June are slightly ahead of 2006’s record pace, setting up the very real possibility that 2012 will be the highest-volume intermodal year ever for U.S. railroads,” said AAR Senior Vice President John T. Gray.  “The recovery in intermodal traffic since the recession has been remarkable and is due in large part to railroads’ huge investments in their intermodal business that have improved rail intermodal’s reliability and efficiency.” 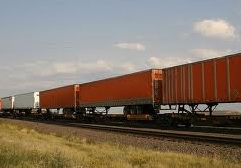 Transport Topics, which covers trucking and freight transportation news, wrote about the increases being higher than any other in the past six years. The magazine’s article cited: “U.S. intermodal traffic rose 5.2% in June from a year ago and was the highest weekly average for the month of June on record, the Association of American Railroads said. Volume rose to 996,022 units, and June’s average weekly volume of 249,006 units was the third highest for any month on record, trailing only August and October of 2006, the rail trade group said.”

Rises in intermodal traffic and transfers between train and trucks are usually a good sign of increased production of goods and services being shipped, and as such, lead to production increases forecasts across the board. CBS News also covered the growth news and wrote:

“Transfers between trains and other means of shipment, like trucks or ships, rose 5.2 percent. Intermodal shipments are mostly comprised of retail goods like clothing or products from overseas, shipped in giant containers. They’re getting a boost from railroads’ efforts to take more business away from trucks by improving their speed and efficiency.”

We’re excited for the second half of 2012, as Calhoun Truck Lines looks to continue to provide premier trucking services throughout the Midwest, and grow our corporate culture to further goodwill for those we serve, employ, and with which we partner. Stay tuned!